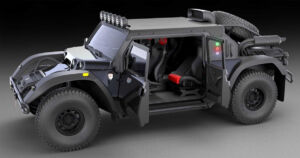 The Baja 1000 has long been the ultimate test for off-road vehicles. The international race stretches over 1,000 miles of dirt track, sand dunes, and steep inclines on the Baja California Peninsula in Mexico.

“We’re working on increasing dynamic air suspension travel for better off-roading,” Musk wrote in a tweet at the time, referring to the Cybertruck. “Needs to kick butt in Baja.”

Now, a Tesla competitor is throwing down the gauntlet, reports. James Glickenhaus, leader of the boutique automotive manufacturer Scuderia Cameron Glickenhaus, challenged Musk to “bring it” at the 2023 Baja event, challenging Tesla to a race — against Glickenhaus’ hydrogen-powered off-road vehicle.

It’s an especially spicy challenge considering Musk’s views on the matter. “You have said that Hydrogen technology is ‘Mind boggling [sic] stupid,’” Glickenhaus wrote in an Instagram post. “You’ve also mentioned that The Baja would be a great test for your Cyber Truck [sic]. We say Bring It.”

“The Baja 1000 would be a great test for your Cyber Truck [sic],” the boutique owner wrote, noting that its gas-powered vehicles raced the Baja 1000 twice, winning last year’s Baja 1000 Class 2.

Glickenhaus’ plan is to convert that winning formula to a hydrogen powertrain in order to race in the 2023 Baja 1000.

“This would be a great time for you to join the race with your Cyber Truck [sic],” he wrote.

Glickenhaus even offered up to “set up charging stations for your Cybertruck,” noting that one tank of hydrogen should be enough for “the entire 1,000 miles.”

Tesla’s top-of-the-range Cybertruck with three motors only has an estimated range of “500 plus miles,” according to the company’s website.

Allowing transportation to achieve zero CO2 emissions will not be something batteries alone will handle. Unless a new…

The Issue of Hydrogen Powered Trucks

Truck makers and energy providers have been reluctant for some time around the issue of hydrogen powered trucks.…

Pearse Flynn, the Cork technology entrepreneur, often marvels at how food giants such as Kerry Group and ABP…

leestat/Adobe Stock Has the time for the “fuel of the future,” green hydrogen, arrived? Recently, some of the…